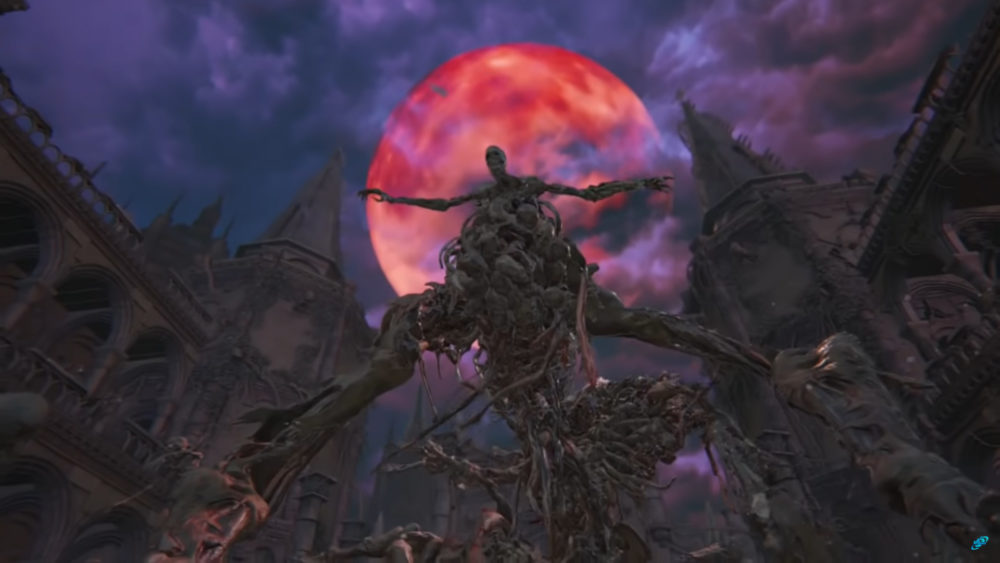 The One Reborn is a hellish creature, formed from the ritual mass-sacrifice of inhabitants of the city of Yharnam in an attempt to ascend humankind. He is a mid-game boss in Bloodborne (2015), a game for PS4 filled with gothic scenery and nightmarish opponents. The One Reborn is hideous to look at – a writhing torso on a sprawling body formed from the corpses of innocent victims. His attacks include rains of limbs and spewing of poisonous vomit.

In an interview for Playstation, the composer of the music for the One Reborn, Nobuyoshi Suzuki, stated that his inspiration for the track was themes of royalty, adornment, horror and of something disgusting. (See The Story Behind Bloodborne’s Haunting Soundtrack).

The regal influence on the score can be heard in the bombastic main theme for the One Reborn. Fanfares have often been used as a means of signifying the arrival of a monarch, or in celebration of royal occasions. They are usually played on brass or string instruments, supported by drums or timpani, follow strong on-the-beat rhythms with 4/4 time signature and are characterised by fast upward leaps to strong, sustained notes in a major key to create a proud feeling of proclamation.

The main theme of the One Reborn (heard at 01:14 in the OST), can be considered a twisted version of a fanfare. It holds many similar characteristics, however they are altered to created a sense of unease and discomfort. The main melody begins in the strings, who play a rhythm that is, for the most part typical of a fanfare rhythm. It consists of on the beat sustained notes, with quick leaps from lower notes. Underneath this, a tuba blares out strong proud notes, but they fall on the weak beat in the middle of the bar, rather than the beginning. The rhythm clashes with that of the violins and subverts the expectations of the listener, throwing them off track and making it difficult to know what will come next.

Suzuki furthermore subverts expectations. In a traditional fanfare, the melody often rises to create a sense of excited expectation. In the theme for the One Reborn, the melody descends. Descending melodies are commonly used by composers to signify a sense of despair and sorrow. Here, the melody not only descends, but in the tuba it descends from Eb to A through an interval of what is known as a tritone/diminished 5th – meaning that there is a difference of three whole tones between the starting and ending notes. The final note that seals the tritone, the A, also forms a whole tone clash with the strings. To show you what I mean, beneath are two MIDI examples, the first with the tuba harmonised with the strings, the second as the tuba is in the OST. Can you hear the difference?

Early classical composers were to be bound to a strict set of rules when writing music. The rules promoted the use certain progressions of notes, harmonies and intervals that were believed good, beautiful and proper, whilst simultaneously forbidding others that were considered ‘dissonant’ or ‘wrong-sounding’. The most infamous of these ‘bad’ intervals is the tritone, believed to be the devil’s own interval because it was so ugly to the ears. Suzuki’s use of the tritone in the descending melody of the One Reborn theme helps to create a sense, not only of sorrow but of impending doom. The tritone is common in dark, gothic music occurs in many places in the music of Bloodborne.

The leaping notes, distintive of the fanfare style, have also been altered to create a sense of distortion. Rather than upbeat major jumps, Suzuki uses minor intervals to create a more sorrowful sound. These minor intervals are juxtaposed with the use of chromaticism in both the harmony and melody. A chromatic interval occurs when a note is played that is only half a semitone above or under another (e.g. if you play all of the black and white notes on a keyboard in order, this would be a chromatic scale). Composers use chromaticism to put a listener on edge. You know that iconic tune from Jaws that makes you instantly scared that the shark is coming? That is chromaticism in action.

The result of all these tools is a theme that is a twisted perversion of royalty, taking the stereotypical features of a fanfare and subverting them from joyous celebration to a proclamation of monstrosity and disgust. Once this theme has been interated in the brass and strings, a choir takes over, soaring to new heights. It is the Mensis Scholars rejoicing and celebrating their new horrendous creation. Underneath this we can hear the timpani and cymbals pounding away in a steady triumphant rhythm reminiscent of the grandiose endings of celebratory pieces of the Classical and Romantic Era (compare 02:45 in the OST with around 06:00 in Saint-Saens’ Bacchanale).

Another theme that can be identified within Suzuki’s score is the element of ritual. As already mentioned, the One Reborn is formed through ritual. In the opening cut scene we see robed figure ringing bells to summon a vortex in the sky from which the monstrous boss drops through. During the first section of the music we can hear direct reference to this ritual – hushed whispers mutter in the background and high pitched bells ring mimicked by the screech of violins. A pounding, steady beat in the bass reminds us of both the beating of a ritual drum and the march of an army. It is a dark thrum of pomp and circumstance that builds an onward drive for the player. Scurrying motifs and more chromaticism layer around this, creating tension and expectation for what will become of the boss in his later phase.

Both this first section and the entirity of the music of the boss’s second phases can be considered depicting the horror of the One Reborn and the regailment of the Mensis Scholars, however there is one part of the music that is different. At 02:09 in the OST a sorrowful, descending melody on the cello is introduced. This melody does not reflect anything previously heard in the piece. It consists of chromatic upward leans that build tension, as well as drops of a 4th which classically is associated with sorrow and sighing. The diminished 5th interval (or tritone) is also present. The sound is more dark and solemn than the wild, bombastic proclamations that surround it. The only other times in the whole of the Bloodborne soundtrack that we hear a similar melody is in the Hunter’s Dream and in the title music. Both of these tracks can be argued to represent the Hunter, the character that the player controls. As such, it could be considered that this section in the One Reborn is representative of the Hunter’s view of the creature before them. It ties the piece into the larger context of the game and the atmosphere that the gamer-makers are wanting to establish.

These are just some of my thoughts surrounding the Suzuki’s genius in composing the track for the One Reborn. I do not have access to a score and I am certain that there are many more points that could be made about the music. For now, I hope you enjoyed the article and let me know if you would like to hear more! 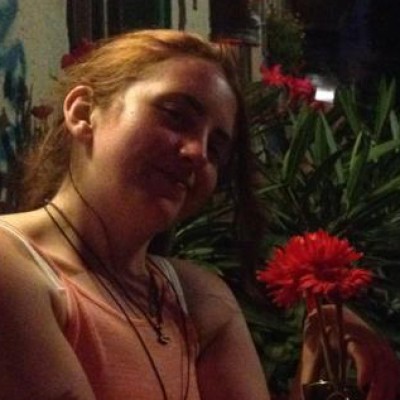